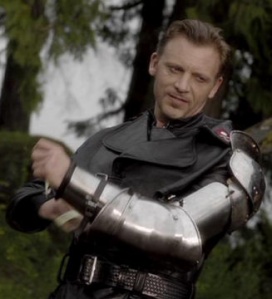 Zero was a Longcoat commanding officer who was promoted to General when the Sorceress sucked the soul out General Lonot. After Lonot's failure to capture or kill DG on the Other Side, the Sorceress sent Zero after her. He was the one who put Wyatt Cain in an iron suit, and who Jeb claims killed Adora. He is portrayed by Callum Keith Rennie.

Zero says "years" in the miniseries, so he is a Slipper.

In Tin Man: Dragons and Ninjas, he slipped over to the O.Z. around nine-years-old and was fostered by Lord Quelala (Ichiro's father). They named him Rei Akio, which was the closest I could get with my name books to intelligent boy with nothing. He was raised as Ichiro's brother, but less than him since Ichiro was the heir. He changed his surname to "Zero" when he enrolled in Tin Men training and kept his connection to the Quelala's quiet. He got through training and became a Tin Man, but left that for a position in Azkadellia's army when she started her coup.

Tales of the Nonestic series:

In Nonestic Tales: Pirates of the Nonestic, Zero was supposed to capture Cain after the Tin Men's Last Stand but failed. That is why he was so brutal when he caught up with the Cains at the cabin.

In What Memories Can Bring, we see how brutal he was at the cabin and to Adora annuals afterwards.