’’Teenage Mutant Ninja Turtles’’ started out as a comic series by Kevin Eastman and Peter Laird. The two men formed Mirage Studios and debuted the first issue on May 5, 1984. Its success was phenomenal. It soon spawned another comic book series by Archie Comics, a cartoon series, a movie trilogy, and another comic book series by Image Comics. But it is the cartoon series and the movies that pertain to my stories.

The cartoon series ran for ten seasons from December 1987 to 1996. Not very serious and targeted at a young audience, it was nevertheless the first taste many people got of the Teenage Mutant Ninja Turtles universe--including me. The first live-action movie was released in 1990. The live-action itself was a treat. Jim Henson's Creature Shop did an excellent job of bringing the Mutant Turtles and Splinter to life. The human casting was great, and the story was well-written and well-acted. I'm slightly biased, but I can watch this film over and over again. The second movie was not as good as the first with the notable exception of adding Keno (played by Ernie Rayes Jr.) to the ‘’Teenage Mutant Ninja Turtles’’ universe. And even though the club scenes with Vanilla Ice are cheesy, I still get a kick out of watching the Turtles dance. The third film got back to the action of the first with a good story line. Also it allowed the Turtles to go outside for some beautiful great outdoors shots.

My fanfics use the origin given in the three films and the events of the films as the official history of the Turtles. Therefore, avoiding the confusion that could arise from the slightly altered origin each cartoon and comic series developed. I also have thrown in some cartoon elements but have changed their introduction to fit within my stories. 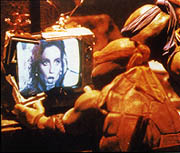 In the first movie, April O'Neil--a reporter for New York City's Channel Three News--is investigating a crime spree caused by the Shredder and his Foot Clan ninjas. The Turtles rescue her from the ninjas and Splinter tells her their story. Fifteen years before, an ooze was dumped on them that caused them to grow mentally and physically. Splinter named the Turtles after Renaissance painters and trained them in the art of ninjutsu.

Splinter learned ninjutsu when he was Hamato Yoshi's pet rat in Japan. Yoshi loved a woman named Tang Shen who was promised to another Foot Clan ninja, Oroku Saki. Yoshi and Shen eloped to America but Saki followed and killed them. Splinter lost his ear when he attacked Saki and scarred his face.

The Shredder kidnaps Splinter. The Turtles make friends with a vigilante named Casey Jones and a rebellious teenager—Dan Pennington--who had joined the Shredder's group. They learn that the Shredder was actually Splinter's old enemy Oroku Saki and defeat the Foot Clan. 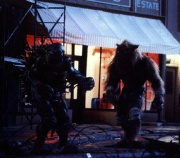 The second movie--The Secret of the Ooze--takes place three weeks after the first movie. The Shredder returns and is hell-bent on destroying the Turtles. He uses the same ooze that created the Turtles to create Tokka and Rahzar to fight the Turtles. The Turtles make friends with Keno, the martial-arts-trained pizza delivery boy, and Dr. Jordon Perry, the scientist partially responsible for creating the ooze.

The third movie takes place a year after the second. Poor April just wanted a vacation and ends up traveling back to the seventeenth century Japan. The Turtles follow to bring her back and get involved in the battles between the local daimyo, Lord Norinaga, and the villagers led by Mitsu. Casey Jones also returns to show time-displaced samurai a good time in the Big Apple before everyone returns to their proper time period.

Canon in this sense is not talking about the weapon. It means the stuff that the original author came up with. In this case, since we are talking about characters, it is all the characters that were shown in the three ‘’Teenage Mutant Ninja Turtles’’ movies that I have used in my fanfics.

These are is all the characters that originated in the TMNT comic books or cartoon series. I have tinkered with their origins to make them fit in my fanfics. The canon characters from other series that I have written in crossovers are also listed here.

The Legend of Zelda

Characters that I created. These guys belong to me, and I would prefer it if you didn't use them in any of your stories. But if you want to draw them, please do so and send me a copy. I'm always looking for ways to show my characters since I can't draw. I could illustrate the stories; I could illustrate their entries. With permission and credit, of course.

The Legend of Zelda