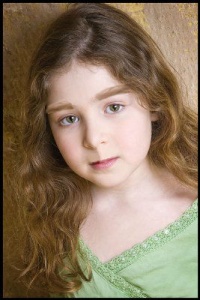 Sprite is an original character for Nonestic Tales: Pirates of the Nonestic portrayed by Rachel Covey.

Sprite is a Viewer, captured and brought to Mount Cove by slavers with her mother and grandmother. The adults were running from Longcoats and there is a strong possibility her father was captured for the Sorceress' use. Sprite and her mother were sold in a lot together to a wealthy merchant. He expected the five-annual-old child to work at the same level as an adult, so when Sprite dropped his heavy packages in the street of Mount Cove, he lashed out with his walking stick. Sprite's mother grappled with the man to stop him from beating her child, and he turned his attack onto her instead.

No one interfered in things between an owner and his slaves, even though it didn't make sense to beat your property to death. But a new arrival to Mount Cove jumped to the Viewers' defense while the gathered crowd gawked. The human woman kicked and punched him before wrenching his walking stick away and hitting him with it. She demanded Sprite and her mother to spare his life, and the merchant agreed. Before the merchant crawled away, she freed them both in front of him.

The woman's name was Betsy Bobbins, and she and her friend, Hank Jenkins, rushed the adult Viewer to the nearest healer. Sprite's mother died from her injuries despite the healer's best efforts. Betsy and Jenkins made Sprite the cabin girl of their crew. The Viewer child takes her responsibilities seriously, at the start because she didn't want to be sold again or go back to the Longcoats, later, because Betsy and Jenkins treated her like a daughter. Betsy was the one who gave her a name the humans could pronounce.

After an annual of sailing on the You and What Navy?, Sprite's behavior changed as if her ability to see people's emotions and memories was turning into schizophrenia. Bobbins and Jenkins went to the Shaman to find out why. They completed a quest for the Shaman, and the witch used magic to change Sprite's abilities to that of an adult Viewer and gave her a better tolerance for the company of humans. The Shaman also told her that she would meet two from her land that she would journey with them to find home.