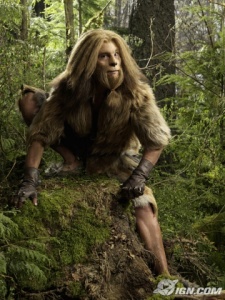 Raw is a Viewer, who fulfills the Cowardly Lion role in Tin Man. He is played by Raoul Max Trujillo. DG encouraged Wyatt Cain to release Raw from a Papay cocoon when they were crossing the Fields of the Papay looking for Hank and Emily.

He uses his gifts to heal Cain, to show DG her past, and to read people's intentions, but is captured along with DG and taken to the Tower. There we see the interaction between the other two Viewer prisoners, Lylo and Kalm, and Raw is treated as an outcast.

Raw's gift enables Glitch to connect to his brain during the Battle of the Eclipse. His courage finally kicks in to protect Glitch and Kalm from Raynz.

Raw, Lylo, and Kalm were all part of the same tribe. They were captured six cycles before the events shown in the Tin Man miniseries and Raw was attached to the Sorceress' viewing tanks. He escaped a week before DG arrived in the O.Z.