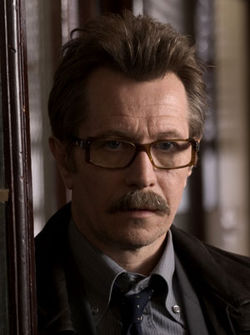 This wiki article has all the details about James Gordon Sr. from the Nolanverse movies.

Batman took the blame for the murders Harvey Dent committed so the RICO indictment against the mob families of Gotham City wouldn't be thrown out of court. The Dent Act was passed despite Gordon and Bruce Wayne advocating against it. Gordon figured out Batman's identity after Bruce Wayne protected Coleman Reese from a desperate man obey the Joker. Reese developed amnesia on Batman's identity after that and Wayne's reaction to Dent and Dawes' deaths cemented it. His relationship with his oldest child fractured after Gordon had to denounce Batman. His daughter moves back to Gotham City and with him during the reconstruction.