Everyone knows the story of Batman: a boy's life is shattered when his parents are murdered in front of him and he creates a superhero to strike fear in the hearts of criminals when he grows up to avenge them. We have comic books, cartoons, television series, and movies all dedicated to telling variations of this story.

I adore the Dark Knight trilogy directed by Christopher Nolan. His overriding goal was to make Batman work in the real world: equipment-wise and more importantly, psychologically-wise. Batman Begins, the Dark Knight, and the Dark Knight Rises tell Bruce Wayne's story, give him a satisfying character arc, and will be referred to as the Nolanverse from now on.

Batman Begins covers Bruce Wayne's training and how he develops Batman. His partnership with James Gordon Sr. begins as Batman fights the mob, the Scarecrow, and the League of Shadows led by Ra's al Ghul. The Dark Knight takes place a year later. Batman has the criminals of Gotham City scared and the mob families on the ropes. They turn to the Joker, who promises to kill the Batman for a significant amount of money. The Joker unleashes a wave of chaos-induced terror on the city and targets the new District Attorney, Harvey Dent, to draw Batman out. Eight years pass before the Dark Knight Rises begins. A beautiful jewel thief steals a pearl necklace from the recluse Bruce Wayne and draws him back out into the world at the same time the League of Shadows led by Bane returns to Gotham to destroy it. 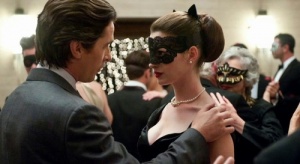 Surprising to me (because the other two films didn't set her off), the Dark Knight Rises with its hints of Bat/Cat romance inflamed the muse. She had to have more! So far everything Batman ties back to the Nolanverse. If elements from other media surface, rest assured I will make them fit into the aesthetics of the trilogy best that I can.

Part of the Night series